Without Borders | Without Limits

Disclaimer: The program is subject to change without prior notice. 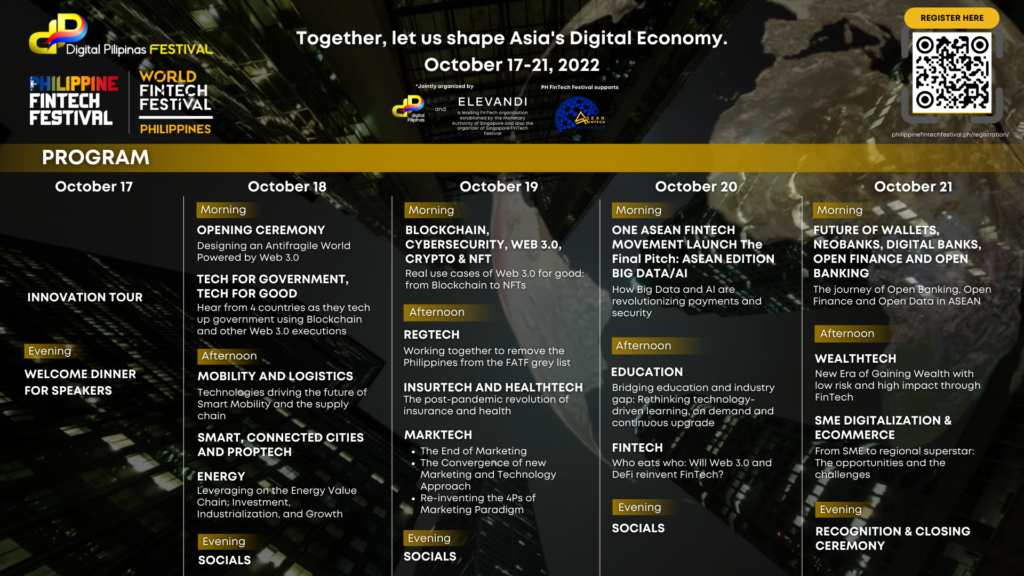 The Philippine FinTech Festival: Without Borders, Without Limits

In the world of innovation and ideas, the sky is not the limit; your mind is.

The developments in financial technology are revolutionizing financial services across the world, with the ASEAN and Asia establishing a solid ground as the center of gravity in space, accounting for 60% of the global GDP and hosting six of the top 10 financial centers worldwide.

Asian consumers are expected to account for half of the worldwide consumption growth in the next decade, equivalent to a $10 trillion growth opportunity. Six of the top 10 financial centers in the world are in North and Southeast Asia, including Hong Kong, Shanghai, Singapore, Beijing, Tokyo, and Shenzhen.

An EY Global FinTech Adoption Index survey of 27,000 digitally active consumers in 27 markets showed that Asia continues to dominate the global leadership in FinTech adoption. Since 2020, small and medium enterprises (SMEs) in the region have adopted FinTech tools on a massive scale.

Across the ASEAN region, FinTech activities are flourishing, with several indications suggesting a sustainable high growth rate. In 2018, internet penetration in the region rose 58%, while mobile connectivity jumped 141%. This primes ASEAN to lead the push in developing FinTech to revolutionize financial services and recognize its potential to address some of the most critical regional issues such as access to financial services and financial inclusion.

Three of the biggest Asian economies, including the People’s Republic of China (PRC), Japan, and the Republic of Korea, are the leading players in global fintech innovation.

Data showed East Asia is among the world’s most active regions for FinTech patent filing. Indeed, the combined FinTech patents from the PRC, India, Japan, the Republic of Korea, and Taipei, China, reach 72.6% of the global total.

Southeast Asia is home to over 600 million people with an economy valued at over $3 trillion. However, according to a study by the Cambridge Center for Alternative Finance (CCAF), financial access remains the biggest challenge in the region, as a high percentage of the population remains without access to financial services and products. At least 17% of customers served by FinTech firms were categorized as unbanked, and 28% were underbanked.

In 2021, ASEAN Fintech startups raised $3.5 Billion in funding, with an additional $3.3 Billion raised in the first quarter of 2022 alone. The payments category received the most significant slice of the funding at $1.9 billion, followed by investment tech at $457 million and cryptocurrency at $356 million. Technology and cryptocurrency funding expanded 6x and 5x from 2020 figures, respectively.

Organized by Digital Pilipinas, the largest privately-led consortium to tech up the Philippines, is hosting the Philippine FinTech Festival 2022 from September 12-16 to advocate the future of FinTech by bringing together industry leaders, startups, and stakeholders into an ecosystem that advances the discussion forward.

Here are what we should expect:

On top of that, while the FinTech sun rises in East Asia, with Asia as the new hotbed, the PFF 2022 aims to bring the Asian experience back to the world.

For four days, the PFF will conduct a Pitch Fest in all the verticals to connect innovators and technologists to investors and seeders from across the world to share not only the ideas from this part of the region but to promote cross-border businesses and partnerships.

The Monetary Authority of Singapore and Digital Pilipinas will also conduct its hackathon as a bonus.

While e-Commerce and social media entities in Western economies are still studying whether to engage in financial services, that future is now a reality in some Asian nations. Take, for example, Alibaba, Tencent, and several other tech firms in the region, and you will notice they are already fixtures in the financial services landscape.

In the next two years, the industry expects these FinTech firms to expand their reach beyond the Asian borders through virtual banks and nascent offerings that leverage API access.